Have you heard this one?

If pro is the opposite of con,

what’s the opposite of progress?

At first ‘glance,’ they sound like antonyms, but compromise has nothing to do with “not promising.”

Their definitions are unrelated – except in the sense of timing. A promise is a guarantee to do (or not do) something in the future; compromise is a word of present action, of that which is done now. 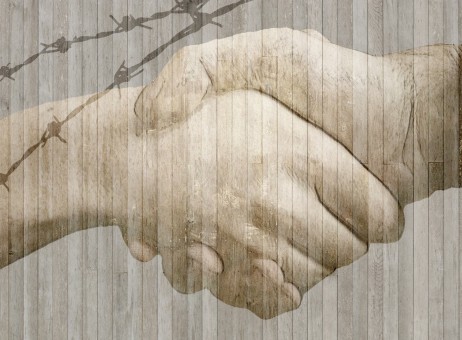 I love researching the origins of our modern phrases, and we have Latin to thank for these terms.

In a literal interpretation, compromise is to “send forward together,” and one of its meanings is positive, in that it is a solution to a problem or crisis. Peace is a good thing, right?

(Come to think of it, compromise is the essence of ‘marriage,’ isn’t it?)

But another significance of compromise is negative:

(Trivia: about the “pinky swear” (pictured above); it has a name in Japanese, yubikiri, which translates to “finger cut-off.” Vows made by pinky swear imply the loss of that small digit, if broken. Now you know!)

Some other ways of “sealing the deal,” so to speak, are

–a wedding kiss
-a handshake
-a signed and sealed contract

Interestingly enough, I’ve thought of another nuance of these two words that are different: Promise is a future perfect, while compromise is the imperfect now.

The life to come, and life in this broken world.

Marshall at Sharing God's Story (https://SharingGodsStory.net) I follow Jesus Christ as a worship musician, writer, and speaker. I share God's incredible story in my life, a story of healing from brokenness, addiction, and failed health; a story of miraculous provision for me and my family; a story of studying His Word to find His purpose for me: sharing my time and talent to give a little hope to you...
Published October 4, 2017October 4, 2017